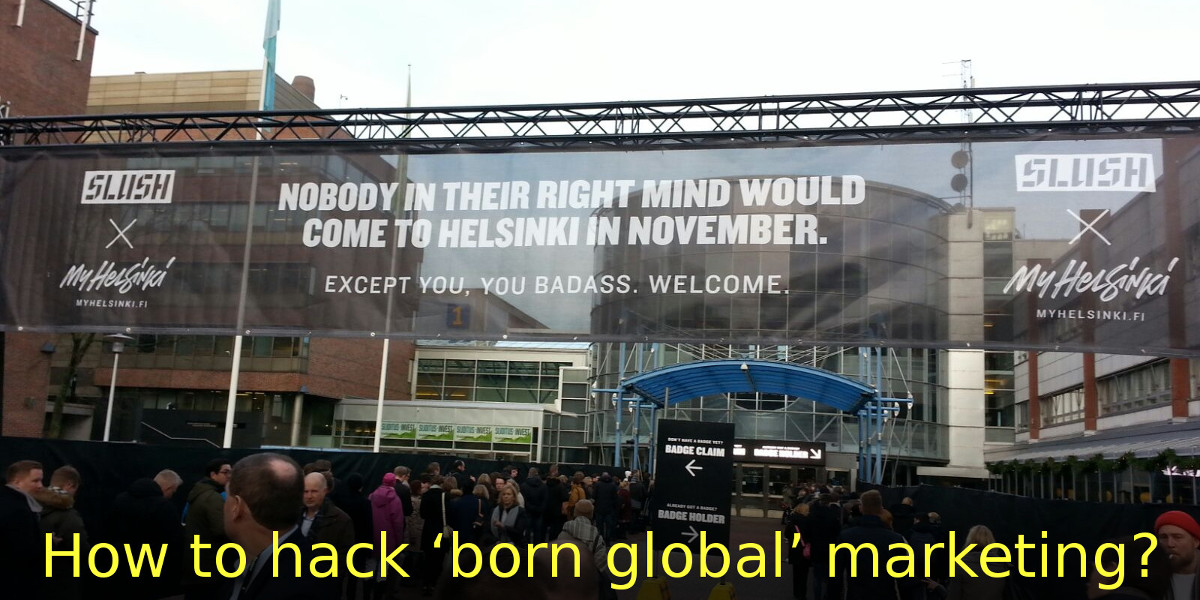 Slush is not primarily about growth marketing.

Correct me if I’m wrong, but as far as I know, there is no export hacking, international marketing or digital sales track at Slush Helsinki. Maybe it’s time for the ‘born global’ startup community to have a conversation about allbound growth marketing.

The reason I take an allbound perspective is because I believe that in many cases, a combination of content strategy, inbound marketing & sales, and paid media offers the best chances of success.

This country is in dire need of export growth as it is still struggling to compensate for Nokia’s demise.

While #Slush16 primarily addresses the future and sociology of tech, innovation, great business ideas and connecting skilled teams to venture capital, there is so much to gain from excellence in international marketing.

Part of the challenge, to an immigrant observer, would seem to be cultural.

There is such incredible expertise, intellectual integrity and world-class innovation in this country. And yet, often the resulting products and services do not nearly receive the international acclaim that they deserve.

To me it seems that the cultural curse, at least in part, consists of an ingrained and persistent belief that, if the product is good enough, it will sell itself.

Sure, the N95 was in every technical detail superior to the first iPhone. But while the N95 had to sell itself, the iPhone was being sold by Steve Jobs.

(I’m overcharging just a little. I have great regard for the efforts by Anssi Vanjoki and his team!)

Sorry; old wounds. It’s time to move on to new wounds and vulnerabilities.

When the wonderful fledglings of Slush fly out of the Tekes bubble and into the real world, what is it that’s going to give them the hardest time? What will cause them to fail? Or to fall and stand up? What’s most critically lacking in their international go-to-market? Who are most likely to succeed and why?

That’s some of the stuff I’d be interested in seeing discussed.

In the meantime, dry socks everyone!