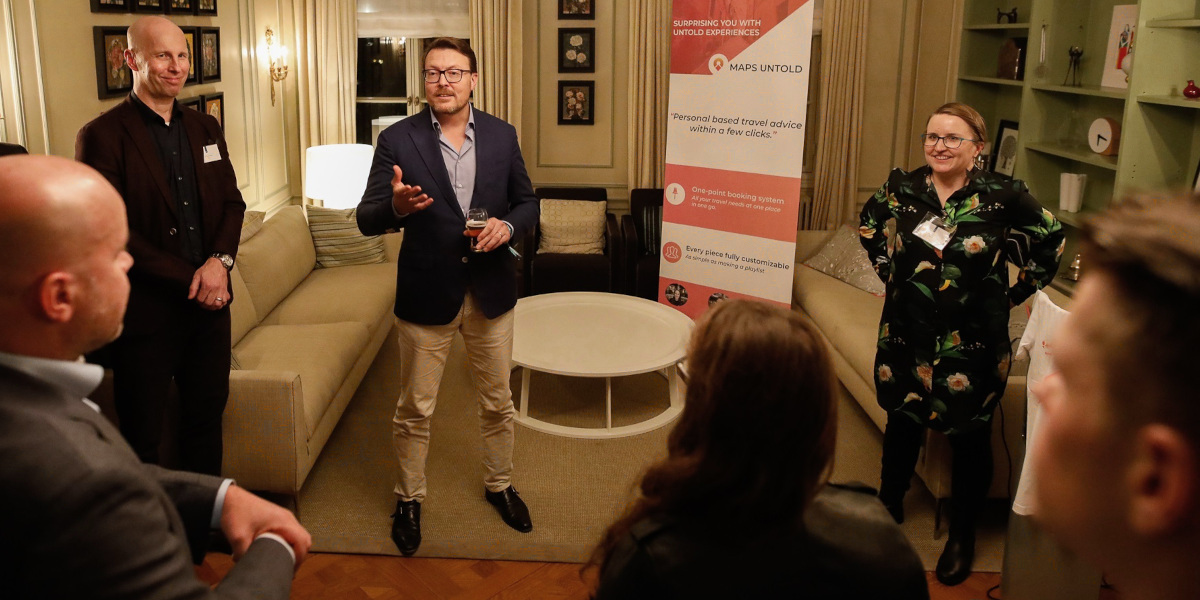 Venla Virkamäki, Policy Officer for Trade and Innovation at the Embassy of the Netherlands in Helsinki, with HRH Prince Constantijn van Oranje-Nassau.

As far as countries go, Finland and the Netherlands have been relatively active in their pursuit of a transition towards a more circular economy. I talked with Venla Virkamäki, Policy Officer for Trade and Innovation at the Embassy of the Kingdom of the Netherlands in Helsinki, about the circular economy, WCEF2019, and the opportunity for Finnish-Dutch cooperation.

In close coordination with the Ministry of Foreign Affairs in The Hague, the Dutch Embassy in Helsinki identifies focus areas for their work every year. In 2019 the four focus areas in which they actively promote information exchange and facilitate networking and partnership building are smart cities, the circular economy, health tech, and the startup ecosystem.

And then there is the circular economy.

Next week, June 3rd to 5th, Sitra, the Finnish Innovation Fund, will host the third edition of the World Circular Economy Forum (WCEF2019) in Helsinki. The first edition also took place in Helsinki, in 2017, while last year’s event was held in Tokyo, Japan.

This time around, the Dutch Minister for the Environment, Stientje van Veldhoven, will deliver a keynote speech and the Embassy of the Netherlands will co-host a number of side events.

According to the ‘Finnish road map to a circular economy 2016–2025’ (PDF), published by Sitra, Finland aims to be a leading circular economy country by 2025 through policies that increase competitiveness, create new jobs and sustainable growth, bringing at least three billion euros in added value to the national economy, while improving ecological sustainability.

The Netherlands, according to its ‘National Agreement on the Circular Economy’, has set a target of “full circularity” by 2050 with an interim objective of 50 percent reduction in the use of primary raw materials by 2030. The estimated potential within the circular economy sector is up to 7.3 billion euros, creating 54 thousand new jobs in the country. Focus sectors are biomass and food, plastics, manufacturing, construction, and consumer goods.

One could frame the circular economy theme as a positive take on fighting climate change, environmental degradation, the pressure on biodiversity, and social exclusion through economic opportunity.

“To be fully circular,” says Venla, “at least in my mind, the most important part is zero waste – everything we produce and use should be returned to the cycle. If new raw materials are needed, those should be obtained sustainably and then used in a way that they can be returned to the cycle. But of course, at the same time, we should also learn to use new kinds of materials and resources which are more easily reused and recycled, like bio-based and recycled materials.”

Venla tells me that policy officers at the Dutch diplomatic missions in the Nordic and Baltic countries work closely together in proposing and formulating common objectives: “Policy officers for trade and innovation meet once a month – via video conference – to share information and best practices. We jointly write a yearly economic plan for the entire region.”

The Dutch team in Helsinki is currently running a two-year circular economy project – until 2020 – which is directly funded by the ministry. “The goal of the project,” Venla says, “is to help build long-lasting partnerships at all levels – not only private but also public and non-governmental – through which new business models can be introduced and taken into use.

“The Netherlands wants to become an international circular economy hotspot. During 2015-2016, as we were investigating the potential for facilitating cooperation in this sector across the Nordic and Baltic region, we realised that Finland is the most advanced in terms of policy formulation and implementation.”

A scalable global market for the taking

Sitra’s message at WCEF2019, and likely the message of the Dutch environmental minister, is that the time is now to move from piloting new technologies and business models to taking them mainstream, scaling up and achieving measurable societal change.

This will require growth investments and development of the necessary regulatory frameworks. As an example, Venla mentions that some EU directives make it difficult to source certain materials that were previously considered to be waste but can actually be used as raw materials in circular solutions. Also, some restrictions on moving waste across national borders may have to be removed.

According to Sitra, there is room for 2000 participants at the event. At the time of this writing, some 80 participants from the Netherlands have signed up.

The Netherlands is Finland’s third largest trade partner. Both are relatively small nations, very dependent on international trade, technologically advanced and strongly committed to a transformation to a more circular economy.

“Finland and the Netherlands are definitely frontrunners,” Venla says. “At the same time, each of them is too small to have all the solutions needed to close the circular economy loops. You need partnerships in solutions that can be scaled to global markets. Because right now there is global recognition and interest in circularity, there is a big opportunity. The scalable market is readily available.”

Recycling textiles up to eight times

Two companies that are showing what such cooperation might look like are ecological work wear designers Touchpoint Oy from Helsinki and Dutch aWEARness BV from Nijmegen, who manufacture composite materials out of recycled textiles and plastics. Together they created a new range of work clothing and outdoor furniture for the Hesburger restaurant chain.

In an interview with Business Finland, the Finnish innovation and international growth accelerator, Touchpoint’s CEO Outi Luukko explained how, with new technologies, textiles can be recycled for new clothing up to eight times, after which they can be used as a composite material, for example in patio furniture.

She was quoted as saying: “TouchPoint was the first Nordic company to provide the working clothes sector with a circular economy service model that not only provides new working clothes, but also puts old textiles to use or at least takes care of their disposal, possibly by using them to create new materials.”

Textile is one of the main themes promoted by the Dutch team at WCEF2019, which is taking an active role in the event with four (co-)hosted side events. One of those sessions is ‘Building a sustainable textile sector – Solutions to develop circularity’, organised together with the industry organisation Finnish Textile and Fashion, on Wednesday, June 5, at the Allas Sea Pool.

Towards a circular AND inclusive society

Says Venla: “Something many people probably don’t realize is that textile is one of the most environmentally harmful industries. According to the European Commission (as reported by Politico), clothes contribute more to global climate change than aviation and shipping. In Europe we throw more than half of our clothing away with mixed household waste, which is then either burnt or disposed of in landfills.”

On Tuesday, June 4, there will be a lunch event in cooperation with TNO, the Netherlands Organisation for Applied Scientific Research, on aligning circular business models with revenue and impact models, at Restaurant Lasipalatsi.

Venla: “The idea that TNO has been looking into is to develop integrated business models that contribute to becoming not only a more circular, but also a more inclusive society.”

On Monday, June 3, at Finlandia Hall, the topic at hand will be ‘Scaling up the circular economy in cities’ – sharing lessons and best practices from eight circular economy hubs (smart cities) from all over the world, in a session organised by Holland Circular Hotspot and Circle Economy, a social enterprise from Amsterdam.

“For Finland, right now is a very interesting moment,” Venla says, “as the new government formation is in progress. I’m rather curious to see how much attention will be given to the circular economy in the new government programme.”

Last question: Is there a good book or another resource, classic or contemporary, that you’d like to recommend?

Venla: “One topic I find fascinating is the growing recognition that it benefits companies to hire people with different backgrounds and qualities. Especially Finnish companies should be more open to diversity. Why not bring in that Dutch specialist to your international marketing and sales team? Or hire a talented Dutch engineer, for that matter?

“In the Netherlands, many companies and organisations still have predominantly men in the most responsible positions. There is something to be improved! Lack of diversity has the potential of becoming a threat, a factor that hinders international competitiveness. Some other parts of the world are moving ahead fast – look, for example, at Silicon Valley where, nowadays, you just cannot not have diversity policies in place.

“Therefore, I recommend anyone reading this to take a good look at diversity. For Finns, the website of Inklusiiv is a great place to start.”

Heidi Lemmetyinen wrote a description of Inklusiiv in English for Digitalist.

As there is no information in English on Inkusiiv’s website as of yet, I asked Katja Toropainen for a short explanation. This is her reply: “Inklusiiv is a campaign that has grown to be a movement raising knowledge about diversity and inclusion in the work life. The website serves as a manifesto and databank for knowledge, and we’re currently translating it into English as well.

“The aim is to finally kick off this important conversation big time here in Finland and continue it. Diversity and inclusion are good for people and good for business. If we want to build success stories from the North we need to get this right. We’ve been lagging behind here in Finland for too long. It’s time to change it.”

Let’s talk.
Do you need help with content creation, curation, planning, channel development, or your brand strategy? Reach out so we can discuss it and we’ll make you an offer.

Jumping on the chat in the right-hand lower corner works great if we are online at the same time. But you may have to submit your email address if that’s not the case.

Of course, you can always fire an email or connect with Jos on LinkedIn.

A bit of advance info about yourself and your situation will help us get off to a flying start. You can use the contact button right here below.

Let’s talk.
Do you need help with content creation, curation, planning, channel development, or your brand strategy? Reach out so we can discuss it and we’ll make you an offer.

Jumping on the chat in the right-hand lower corner works great if we are online at the same time. But you may have to submit your email address if that’s not the case.

Of course, you can always fire an email at jos.schuurmans@cluetail.com or connect with Jos on LinkedIn at https://linkedin.com/in/josschuurmans.

A bit of advance info about yourself and your situation will help us get off to a flying start. You can use the contact button on the left.