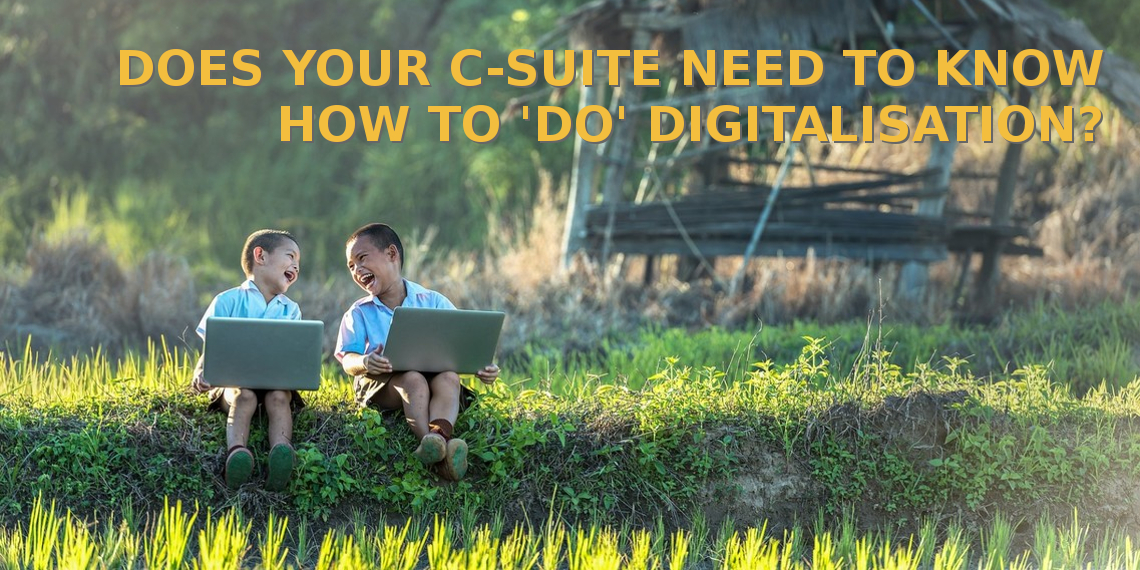 Wow. I didn’t see that one coming. It was a remark by someone (I don’t wish to put anyone on the spot) in the audience at a business panel in Mikkeli last month *1). They basically said – and I’m paraphrasing from Finnish:

“Well, a company’s leadership doesn’t need to know *how* to carry out digitalisation. That’s for their staff to know.”

As it happened, I had just been ‘spontaneously volunteered’ to the panel and asked to respond to the thesis on this slide: 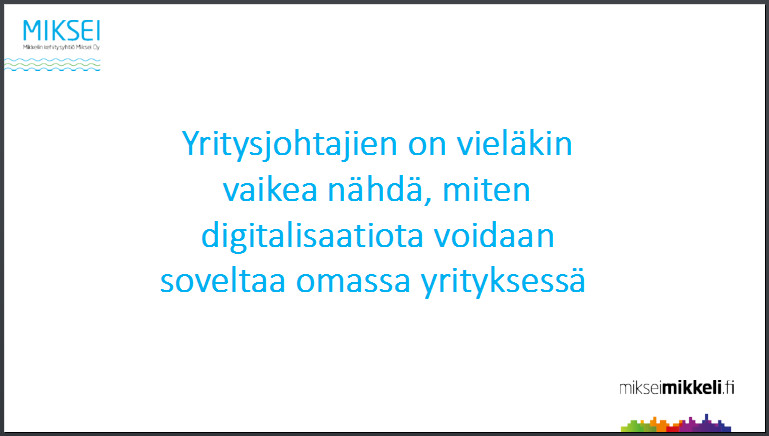 “It is still difficult for business leaders to see, how digitalisation can be applied in their own company”.

I agreed (with the slide, that is). What I said was that for many company leaders it must be a considerable challenge to deal with digitalisation because it has such an enormous impact on every aspect of the business and the organisation, from culture to technology and everything in between.

What I would like to argue here is that digitalisation is not something the C-suite can afford to just delegate, because it turns everything about a business inside out and upside down.

Not only does it affect business processes and ways of working in a practical sense. It may impact the direction and strategy of the business at every level. It touches markets, competition, customers, contractors, employees, as well as internally and externally facing business processes.

Let me zoom in on just one small slice of digitalisation, namely marketing and sales.

The way existing and potential customers interact with businesses, the way they do their own ‘procurement research’ and how they reach buying decisions, has been changing radically in recent years and is having a huge impact on how businesses need to communicate, market and sell.

These changes are due to a longer wave of digitalisation. Not just the current awakening that we’ve been witnessing for the past five years or so, with fresh attention for IoT, digital business process redesign and so on; but rather due to the digital evolution of which the internet has been the great catalyst. It’s trendy now, but it’s not all new.

The selling process has to evolve

Potential customers don’t respond well to cold sales calls. They know how to block banner ads, skip commercials and filter out unsolicited email. They are better able to inform themselves about competing products and services and their pricing. As a result, customers often have already taken more than half of the buying decision before talking with a sales person. Power has shifted from the seller to the buyer.

If the buying process changes so radically, it means the selling process has to evolve with it. Service design has to be tuned to the digital market place. Efficiencies of scale change pricing structures and give birth to entirely new categories. So how could this not touch the C-suite?

Here is another symptom of digitalisation for which, again, the internet is the catalyst: the Cluetrain Manifesto is coming true.

In order to build brand trust and thereby brand value, transparency and thought leadership will become critically important in competitive markets. The way Joel Gascoigne has taken his company Buffer to staggering growth is a great example of this.

Brands that are going to be successful in this game will, to some degree, transform the control and command structures traditionally managed by their corporate communications and marketing teams.

(I worked in such an environment for six years at Nokia HQ and I would argue that the Dream Team didn’t anticipate this, which contributed to the brand’s spectacular fall.)

So here’s for the sake of argument:

Successful brands will dissolve the internal monopolies on communication.

They will train and mobilize experts across their organisation to communicate with the external world on behalf of the brand. Whole organisations will become teams of marketing-communicators.

It’s been 18 years since the Cluetrain Manifesto. There are signs that the walls of Fortress Business, at least in some industries, are starting to crumble. Or, to borrow from Hugh MacLeod’s visualisation, that the membrane is becoming more permeable. 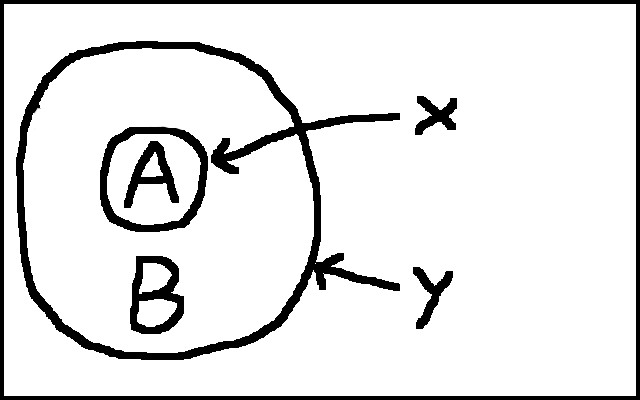 “How” to manage this change cannot be left to corporate comms or marketing. It will constitute a whole new way of doing business and it will affect every single person in the organisation. Including every member of the executive board.

It’s just too big. And this is only one of many areas in which business is being affected by digitalisation.

Do you agree that the C-suite cannot afford to delegate digitalisation? Are you seeing sales processes changing around you? Do you believe that successful brands will dissolve internal monopolies on communication? Please, share your views!

*1) The occasion was the ‘Business Blender’, organised by regional development agency Miksei Mikkeli. A ‘collision event’, ripping and mixing small and medium-sized businesses from Etelä-Savo in a bit of an arty setting with performance and presentation coaching at the Mikkeli Theatre. Most of all, it was a relaxed and therefore effective networking event.

The Blender came out of two projects at Miksei, focused around lean processes and lean leadership. Project managers Marjo Niittuaho-Nastolin and Kimmo Haapea moderated the event quite inspiringly. Good concept, good execution. I look forward to the next one.